Hey y’all. These past few weeks have been crazy. As many of you know, Jenna Skyy and I were asked to do Drag Queen Storytime for the Dallas Public Library. It’s a great way to teach kids at a young age love, tolerance and acceptance.

We’ve done it before and it was great. This last time we did it, though, we got a lot of negative push-back.

First we had protesters lined up across the street from the Oak Lawn branch of the library. Bless their hearts; they were a year too late. We had done the Storytime there the year before. The sad thing is that they drove all the way from Louisiana for their protest. 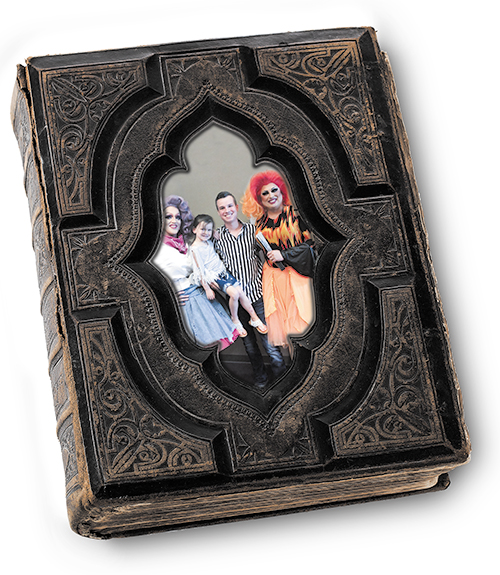 Talk about your waste of time.

When we started advertising this latest one, almost immediately, we had threats of protesters. One of those activist mommy Facebookers even started a group to make sure we had plenty of hate and protesters at our event. I had one woman message me and ask if I would kindly not show up to the storytime; she was asking as a good Christian woman.

More and more posts from conservative Christian and hard-core Catholic groups started popping up, encouraging people to help put an end to us corrupting the children of the world. What I don’t think they knew was the more hate they put out about us and our little storytime, the more love and positivity we were actually getting.

Every time I got any messages on the negative side, I would immediately send it to our friends at the Dallas Public Library. They let us know that they were taking all of it very seriously and assured us that there would be plenty of security there with us the day of our event.

On a personal note, Jenna and I both started to have a little anxiety over all of this negativity being hurled our way. It’s hard not to let yourself start to think of the absolute worst things happening. We were trying to stay positive about the whole situation, but the personal attacks were starting to take their toll on us. We were both losing sleep, and our anxiety was high.

Then we found out that one of the loudest voices speaking against us was a former drag queen. I refuse to say his name or help him spew his hate.

This person, who I will from now on refer to as Dick, did “drag” at one point in his life. I put “drag” in quotes, because I don’t think she ever had a real paid booking. Then Dick found God and was born again, stopped doing drag and proceeded to tell all of his drag queen friends how they were going to hell. Then a year later, Dick apologized to all of those friends, claiming to believe in a “live and let live” philosophy.

But apparently, Dick is back on that self-hating kick and is back to his “I know best because I am a child of God” ways.

Look, I am not reading anyone because of their beliefs. I just don’t understand why religious folk can’t just accept that not everyone has the same beliefs as them. And when it comes to the drag queen story time, if you don’t like it or agree with it, then don’t come to it. It is not your business to tell someone else how to parent.

I don’t have children, but one thing I know for sure is no parent wants to be told how to parent their own child.

The day of our event, Jenna and I got in drag in some very cute, child-friendly costumes. I wore flames with flaming red, orange and yellow hair. Jenna was a purple-haired cowgirl. We showed up at the library and could see a lot of protesters at the end of the street, in front of the library parking lot. As we got closer, we realized that on the left of the library parking lot entrance were the protestors who were against us — about 20 of them. But on the right side there were counter protesters — 40 — of them, wearing rainbows and cheering for us.

Talk about different energies! Left side — frowns and absolute disgust; right side — smiles and love. I’m very gay so I also noticed a difference in the colors they wore: Left side — brown, black and starched white shirts; right side — colorful shirts, rainbow tutus and a few fairy wings. It was beautiful.

Then once we were inside the parking lot for the library, there was nothing but calm and an open, welcoming group that worked for the libraries, all with smiling faces.

It turned out to be the biggest drag queen story time we have ever done. I think last count was 148 parents, kids and community members.

We put on a great show for the kids. I let them pick the books they wanted me to read, and they chose a book called What Color Is Your Underwear? It’s an adorable little book with flip-up pages that show Chris Crocodile wearing yellow, furry underwear and

Harry Horse wearing cherry-red boxers. Then the big shocker on the last page is an elephant with a leaf covering his bottom, and when you lift the leaf, you find out the elephant isn’t wearing underwear at all, and we all just got mooned by an elephant. The kids cackled and laughed, and that sound of overall joy was exactly why we do the story time.

We each read three different books to the kids. Jenna read — actually sang — a book called The Soup Opera that had the whole room singing, “I CAN’T EAT THE SOUP!” Very interactive and lots of fun. Then we spent the next 45 minutes taking pictures with excited kids and, sometimes, even more excited parents. We felt like rock stars.

When the room began to clear out a little, Jenna pointed out a lady sitting in the front row with two phones videoing us. After we took our last pics with the kids and a few of the warriors that counter protested out in the heat (they were the real rock stars), I walked over to the woman in the front row and asked her if she would like a photo with us. She politely said no and started to leave. I told her I only asked because I wanted everyone who came to feel included — including her. I told her to have a good day; she looked back and said, “You as well.”

The day felt like a complete success. My heart was full; my anxiety was gone, and I knew in my heart that we made a difference.

Some of the kids remembered us from other story times and called us their friends. We had a former English teacher cry when she hugged us and thanked us for promoting literacy. There were so many gay and straight parents with open minds and open hearts that you couldn’t help but feel good. It was a great experience.

Then a few days later, a few of those alt-right conservative websites started to post stories about a creepy drag queen reading a story to children asking about their underwear. Geesh! They even posted our real names. It kind of felt like a gut punch.

I am absolutely proud of everything we did; I just hate that those crazies now have my name in their mouth. These are scary times, and, in Trump’s America, I’m a little more afraid. Since then, Jenna and I have both received horrible messages — one calling us pedophiles and another saying we were grooming future pedophiles and others saying even worse.

But I refuse to live in fear. If the library asks me back, I will absolutely do the drag queen story time again. The truth is, I am really good at it. My talents as an emcee in a drag show helped me to entertain a room full of children and their parents.

Sometimes I doubt my abilities; how can I be a foul-mouthed drag queen for a show at a bar and then be wholesome and fun for the kids? It’s because I know my audience and adjust my material accordingly. It’s called being a professional.

A little fear, I believe, is a good thing. It keeps you on your toes. But counter that with a little confidence in a job well done, and you have a healthy attitude to be a performer. If you are not living your life in a way that makes someone out there hate you, are you even living? I’m gonna stay strong and love more, bitch less and be fabulous!