Cassie and the critters in Midlothian

Hello beautiful people. Since all of the quarantining stuff started, I have been spending a lot of time in my backyard. I love my backyard; it really is a sanctuary for us. I grew up very much a city boy, but since I moved out here to Midlothian 15 or 16 years ago, I have had a lot of contact with wild animals.

And I love animals. I have five dogs and a giant, 125-pound tortoise, plus the menagerie of critters that visit me in my backyard. We have regular visits from a couple of possums, an armadillo, a fuck-ton of squirrels, every bird you can think of — cardinals, bluejays, doves, woodpeckers, hawks and two vultures or buzzards … whatever they are called. The vultures (or buzzards or whatever-you-call-them) stop by my front yard, and I feed them hot dogs. They don’t come by often, maybe two or three times a year. They are hideously beautiful, like an uncut penis. 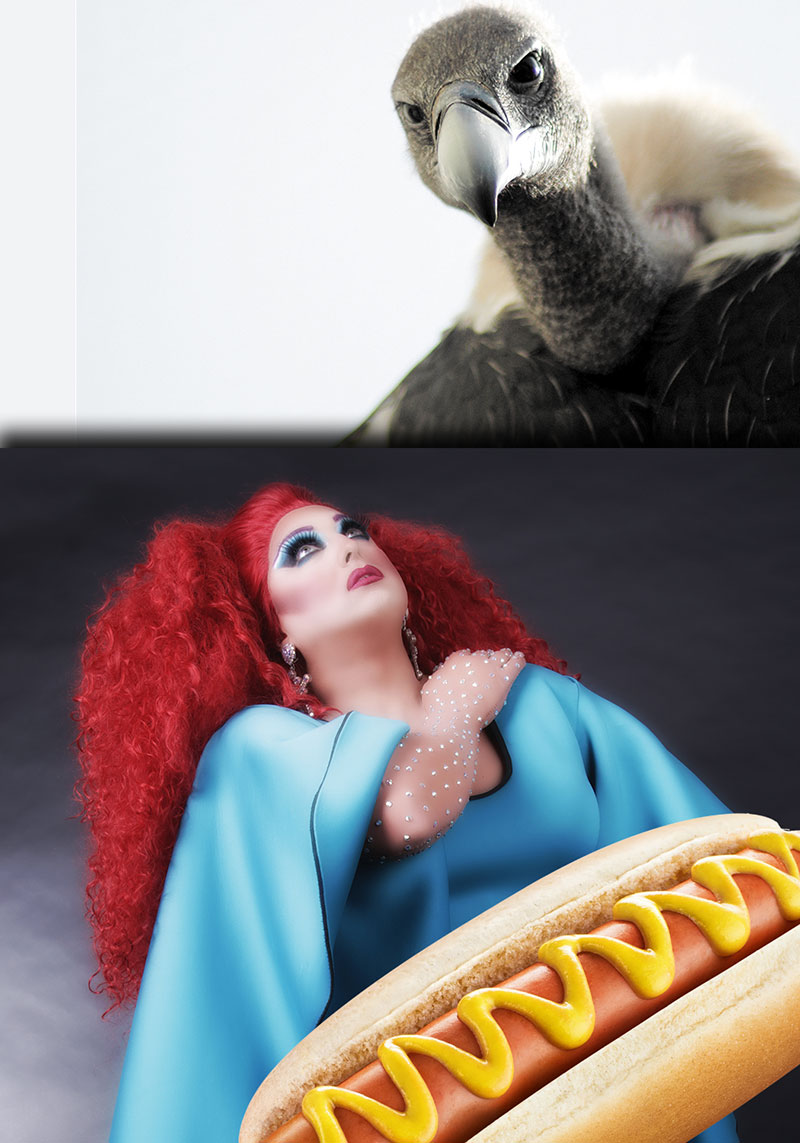 Once when we were having a pool party— I think it was July 4th — a young bluejay decided to land on my husband’s head and squawk at us. It was super weird. Then he started landing really close to the people that were eating, demanding they feed him. He was loud and kind of being a dick about it, so we finally hand fed him some hot dog and bun. Before any of you animal goodie-goodies start to bitch that we shouldn’t feed the animals, you were not there. How can you say no to a loud-ass bird bitching to be fed? After he got a few bites he left us in peace. My friend Fantasha then exclaimed, “What kind of Disney bullshit you runnin’ over here? You got birds landing on you, wanting to be fed and talkin’ to you!” I told her I was a Disney princess. Well … a queen, at least!

We later found out that our neighbor, Chris, and his girlfriend found that bluejay as a baby and rescued him. They named him B.J. You know exactly where my mind went, but it was just short for “Blue Jay.” They fed him until he was old enough to go out on his own, which explains why he was so tolerant of people. We still see him from time to time, but he keeps his distance from us now … as it should be.

That same day, we had hundreds of little butterflies everywhere. Some years we have more than others. I remember one year we had thousands of them — little butterflies about two inches across. They looked like dulled-down monarchs — brown and yellow with a tiny hint of red. Every year, I make rounds to fish out any butterflies that land in the pool. I put them on the top of the fence poles to let them dry out, and once they do, they fly away.

Down the street from us lives a guy with a little farm, and for a while he had goats. This was about eight years ago. One day,

I was sitting, watching TV in the living room, and I hear footsteps on the porch — like, a lot of footsteps. I look out through the curtain, and there is an entire herd of goats in my front yard and on my porch! There were 15 to 20 of them, most of them full grown but a few babies. So cute! I knew where they came from, so I started to walk down towards the guy’s farmhouse, and the goats all followed me. I felt like the goat whisperer.

His gate was open, so I walked them into the yard, and they all followed along like it was nothing. I wish I could have gotten a picture of me walking down our street with a herd of goats following me. For the record, I think I was dressed in a long T-shirt, short shorts — possibly boxer briefs — and no shoes. That had to look like some gay-ass country shit. I guess the goats learned their lesson, because it never happened again.

Then, about five or six years ago, I am driving home from the show and pull onto our street at about 3:30 to 4 a.m. I drank earlier that evening — like, more than I should have — so it took me a while to sober up enough to drive. But once I turned onto my street, I thought, “Oh shit! I am still drunk!” There was about 30 boars walking towards my car — every size monster pig you can think of, from little-bitty tiny babies up to gigantic prehistoric-looking mutherfuckers. I seriously had to wipe my eyes to make sure I was actually seeing what I was seeing.

We have a wooded area next to our house, and I had heard there were coyotes and wild boars living out in the woods. But seeing an entire flippin’ herd coming towards me was a trip. I stopped the car in the middle of the street, and the pigs just

ignored me and kept walking, turning on the next street and heading back into the woods.
When I got to the house it was apparent that a herd of asshole boars had been there — holes dug up all over our yard, hooved footprints everywhere. They kinda fucked shit up. That was the one and only time I have ever seen wild boars near our house. If it wasn’t for the messed-up yard and holes everywhere, I would have thought it was my imagination or a drunken

hallucination.
We have also had our fair share of snakes and tarantulas out here. They freak me out a little bit when I see them, but I usually just shoo them out and away from our yard. For some reason, Midlothian has lots of tarantulas, and some of them get pretty big. I don’t bother them; they are just trying to live their lives, and they eat other problem bugs. Same with the snakes — I’m not a fan, but they are not my enemy. The dogs leave them alone, and they leave us alone. We coexist.

Sorry to ramble on about critters in the country, but that is what is on my mind this week. I hope we get to be around people again soon, because I miss y’all and need something interesting to write about. And since I am not Doctor Doolittle, my conversations with animals feels very one-sided.