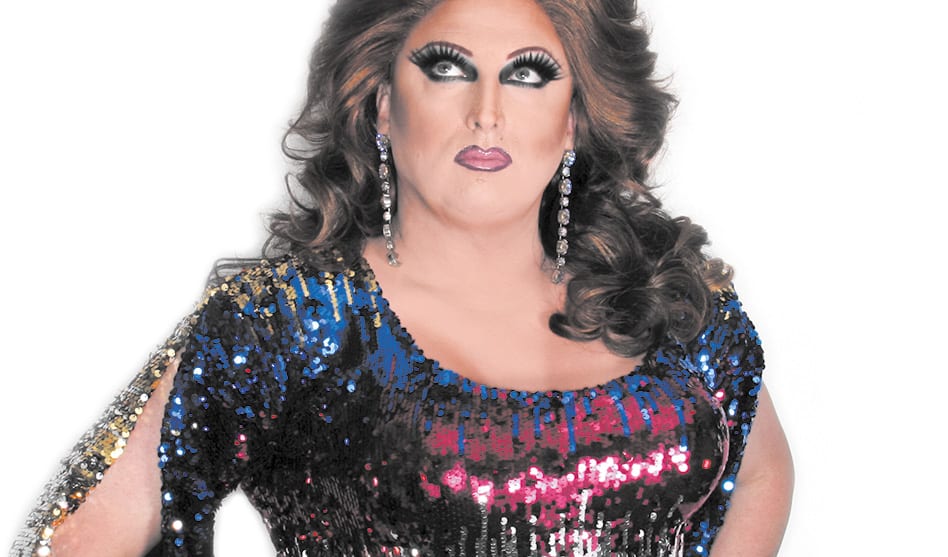 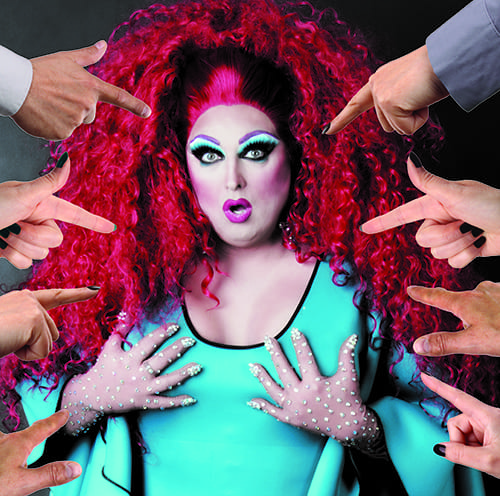 Greetings and salutations! As I sit down to my computer today to write, it is raining.Actually, it is storming. I love it. Hopefully the rain will wash away some of the plant spunk from the air, and I can go a full day without a sneezing fit. I have the most annoying sneezes. They are either full on yells or very unfulfilling little inward sneezes that almost blow out my eyes. It is very sexy.

I have something I want to vent about. A few weeks ago, at my Monday night Freakshow a JR.’s, I had an encounter with an idiot. I know … shocking. We were having a great show; the bar was busy, the tips were good. It seemed like everybody was having a good time. Since starting this show five years ago — we have always closed with the old drag show standard: “If You Don’t See.” Drag queens have been doing that song since before even I was doing drag. We even used it as the old Rose Room closing number. It’s just fun.

Now, keep in mind that some of my girls who work on Monday nights have been there for all five years and should absolutely know that song backwards and forwards … Hell, even the audience knows every word to the song. Still, many of my girls eat some of the words on it. I, as the emcee and the boss, make the younger girls get up there to do the closing production. I like to sit back and be real judgy.

So on this particular night, I thought it would be fun to fuck with the girls that didn’t know every single lyric. I announced that if any one of them missed a single word, we would start it over from the beginning. The pressure was on! Then the song started.

First to step up was Fantasha, the consummate professional — she knows every word and every beat and hits them perfectly. Next up was Raquel Blake (one of the girls who has been with the Freakshow from the very beginning and has performed this song probably more than any other cast member) … who immediately messes up the lip-sync. I yell to the DJ, “Start it over… she fucked it up!”

The song restarts and the girls devise a strategy: The ones who know the words perfectly will help the newer girls get through it by feeding them the words from behind their backs. It was hilarious. I made them restart the song at least four times. It was like a full-out dress rehearsal, and no one was leaving until the choreographer said it was perfect. I was loving it; the crowd was loving it. The girls were acting aggravated, but they were having fun as well.

That’s when the idiot appeared. This little man in his early 20s walked up to the front of the stage and started to scream at the girls, “Don’t let her treat you like that, she’s a bully.” Like, seriously yelling it. “She thinks she is better than you … she’s a bully.” It was like that scene at the end of Invasion of the Body Snatchers when Donald Sutherland opened his mouth and screeched while pointing — This kid pointing at me and screeching, “Bully!

First I want to say, what a beautiful life this kid has lived if he thinks that what I was doing is bullying. What kind of fairy-tale existence has he had that would make him think that ribbing and banter between drag queen sisters for the sake of the show is bullying? I was shocked. Then I was pissed. I have never wanted to wring someone’s neck so badly in my life. I had a split second in my mind where I showed the little fucker what actual bullying looked like and I ripped him a new one, but then reality set in, and all I could really say was, “Gurrl, bye!”

I let the girls finish the song — which they finally did perfectly — and we ended. I had been rolling my eyes so hard at this kid that I was starting to get dizzy, so I went into the DJ booth to get away from him. He then proceeds to go up to each one of the other showgirls to ask them, “Why do you let her bully you? She thinks she’s better than you.” My girls mostly just told him to shut up, that we were having fun. They told him to chill out and go away… except May May Graves, who told him, “She signs our checks so she is better than us.” I about fell over when she told me that.

For the record, I adore my girls. I feel very parental towards each of them. I love them and know that the shows at JR.’s can be hard to do sometimes. But they always do a great job and I couldn’t be more proud. To the young boy that considers me a bully, I would just like to say, “Bless your heart!” which we all know is southern for… well, you know.

As someone who actually was bullied into my teens, in a way, I would like to thank my bullies. You helped make me into the person I am today. I learned to stand up for myself. I learned to defend myself. I learned how not to treat a person. Bullying is never OK, but in my case, I learned from it. It hardened me in ways that have been very beneficial as a human and especially as a drag queen. Stay strong my friends and don’t let anyone dull your shine!