Hello all. Today is a beautiful day. I don’t know what the weather is like the day you read this, but as I write this, it is a gorgeous day. I want to be outside throwing sticks or balls, and occasionally one of my dogs would bring it back. I want to sit in the sun and absorb as much vitamin D as I can and not just have it forced into me. (Well, honestly, I don’t mind a little forced D on occasion.) I want to relax and read a magazine or a good book on the patio, listening to nature and feeling Zen as fuck.

Nope, I am full of shit. If I weren’t writing this, I’d probably be inside sitting in the dark watching some bullshit on Netflix and wishing I had done more with my day. So let’s make the most of it.

So, a few weeks ago I went to Zestfest. This is the fourth year in a row that my merry band of masochists and I put ourselves through this. Zestfest is a “festival” of vendors that have all things spicy — things ranging from seasonings and hot sauces to whiskey and beef jerky. Seriously, they have anything you can think of — and a lot of things you would never think of — spiced up for your nerves.

They also have cooking demos, quasi-famous chefs and products for sale.

Every year we go, we tend to get just a little more adventurous. This year, that was a huge mistake. Now, I love spicy food. I literally put the spicy version of that Slap Yo Momma seasoning on just about everything, except cereal and ice cream. My husband, who couldn’t take any heat when we first got together, now eats food just as spicy as I do.

Remember that show Roswell? The alien kids put Tabasco sauce on everything they ate. I thought I might be an alien. I always thought the spicier the better — until this last Zestfest. 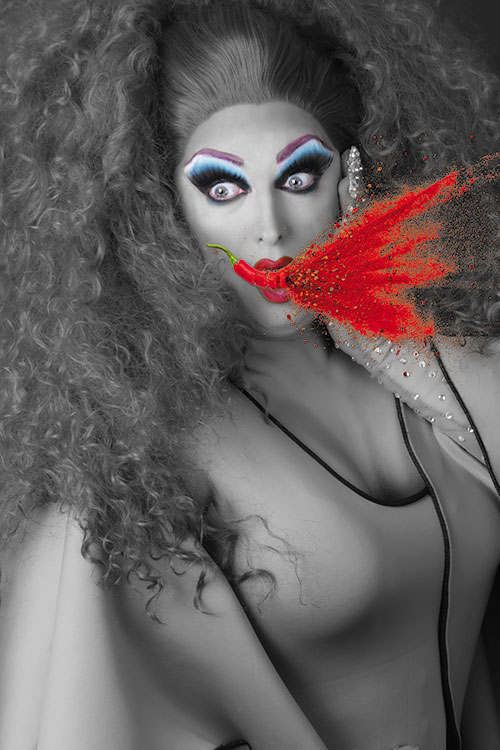 So, my friend Chad and I spent the first hour or so of Zestfest walking around, trying everything the vendors asked us to try. We found this smoked salsa that was amazing, a chipotle mustard that we had to have and a hot sauce that was made with sweet potatoes. Almost everything we tried that day was so good.

We like to walk the whole place first and try just about everything, then go back to buy the things we really liked right before we leave. Nobody wants to walk around with bags weighing you down.

While walking around, we see this stand that has beef jerky. I love beef jerky. I especially like the kind that is dry and has more of a crunch than a chew. Beef jerky that feels fatty or eats like an overcooked piece of steak is not my go-to jerky. I mean, I will still eat it, but it’s not my first choice.

Any who, this stand had every flavor of jerky you could think of — taco flavored, Bloody Mary flavored, lemon pepper flavored — and they were all amazing. Seriously, it was some of the best jerky I have ever had. The couple working the booth encouraged me and Chad to try them all, so we kind of went crazy. Then we see, all the way down on the end, one that said very simply, “reaper jerky” — not in all caps or in a red or fiery font; just very plainly: reaper jerky.

We were feeling good. By this time we had a couple of beers and a few samples of some spicy whiskey, so we were feeling no pain — that was, until the reaper jerky.

I immediately knew we had made a mistake.

I’ve never been pepper sprayed, but I imagine it is similar to eating reaper jerky.

My lungs started to burn before my mouth did. My eyes started to water, and then, through my tears, I see Chad. He is blood red and dripping sweat. We looked like every cartoon you have ever watched where they eat something spicy. I kept picturing Yosemite Sam in Who Framed Roger Rabbit, screaming, My biscuits are burnin’! My biscuits are burnin’!”

The real problem was that the heat just kept building. It felt like it just kept getting hotter and hotter. We were in public, so I was trying to act like I wasn’t dying. But I was seconds away from being in a fetal position on the floor crying for Mommy.

The couple working the booth were at first glance a really good-looking duo — she was lovely, and he was kind of a daddy, tatted, bearded and buffed. But after the reaper jerky, I saw them for what they really were: devils from hell.

She had a tail and horns, and his beard and tattoos were actual fire.

Devils, I tells ya!

Then they had the audacity to tell us, “Oh yeah, that’s a little spicy.” Ya think?!

As Chad and I are almost on our knees, our savior, Jeremy, comes from out of nowhere with pints of milk for us both. For the record, beer makes it worse. I don’t know it was the carbonation or what, but beer made it feel like bubbling acid in my mouth.

Now, I don’t drink milk, like ever, except cereal milk. But that pint of milk was the best thing I have ever put into my mouth hole. It didn’t happen all at once, but it almost immediately had a neutralizing effect on that devil jerky. It took about 20 minutes to get back to feeling somewhat normal, but I don’t think I could actually taste anything for about 24 hours.

And speaking of 24 hours later — all I will say is, “LAVA!” Fucking reaper jerky made me feel like I was gonna die … twice! Sorry to over-share, but it is the truth.

So, who wants to go to Zestfest with us next year? It’s fun!