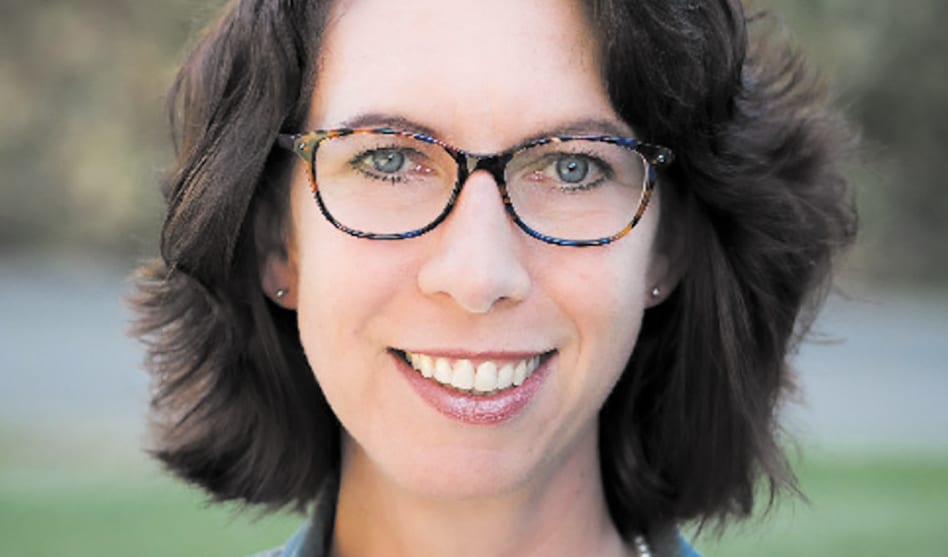 Fifty years ago, it was a busy summer. Nationally, everyone was glued to their TVs to watch men walk on the moon. Woodstock called to every hippie here, there and abroad. Charles Manson terrified Californians. And gay and lesbian folks watched closely as a little bar in Greenwich Village became a flash-point for rights.

If you are over age 60, you might have memories of the Stonewall Riots — vivid ones that may have become gauzy, or sketchy ones, perhaps, from the viewpoint of a child. If you’re younger, the Stonewall Riots are undoubtedly just a story to you and there’s a lot for you to learn.

To mark the anniversary of this event that altered so many lives, look for these new books. 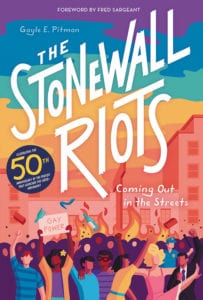 Ancient statues and classic paintings can tell you a lot about what people did long ago, and what they thought about, worshipped or just plain liked doing. But the same goes for more modern items, although some accounts get “complicated — especially if that story differs depending on who tells it,” writes Gayle Pitman, author of The Stonewall Riots. That’s what happened — at least partly — in the tale of gay liberation: few records were kept, mainstream newspapers were mostly silent and key players died without memorializing their experiences. Even so, there are enough objects to tell a story.

Pitman begins with a basic history of Greenwich Village in New York City and the Jefferson Livery Stable, which housed horses long before it became Bonnie’s Stonewall Inn (eventually dropping the Bonnie’s).  There’s a possibility, writes Pitman, that the word “Stonewall” might have been “a coded welcome message to lesbians.”

Back then, being queer meant almost certain persecution until a gay man named Harry Hay and three of his friends figured out that the best way to work against discrimination was to organize. They started the Mattachine Society in 1950, and Pitman includes a photo of one of their early meetings. Five years later, Del Martin and Phyllis Lyon started the Daughters of Bilitis, an organization for lesbians.

And yet, the discrimination continued; by 1966, “resistance was in the air.” African Americans had been fighting for civil rights for quite some time, and antiwar protests were just starting to coalesce. Small uprisings had been staged on behalf of LGBT people in California, while in New York, LGBTQ individuals were getting pretty tired of police harassment, Mafia shake-downs and raids on their hangouts, until on June 28, 1969, their simmering anger boiled over.

Do 10-year-olds have difficulty grasping happenings in their great-grandparents’ day? If so, parents will be glad that The Stonewall Riot is written in the way that it is. Using everything from photographs, matchbook covers, clothing and other ephemera, Pitman makes gay history relatable for its intended (young) audience because kids are big on keeping mementos and special objects. Through the stories of selected items, Pitman explains the events surrounding the night of the riot and she draws a few threads between then and now, but she’s careful not to be too hasty in filling in historical blanks. Those unknowns serve to leave kids hanging a bit, and they heighten the excitement and outrage of what happened. 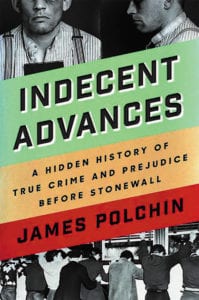 Beginning in the years before the Stonewall Riots, Indecent Advances takes a look at the crimes committed against gay men, long before equality and rights were a notion, let alone even being on the table.

Murder, of course, lines the pages of this book but you’ll also read stories of harassment, assault and minor crimes that were embellished so that they could be charged as more serious. Polchin also looks at how criminal acts committed by and aimed at LGBT people came under controversy when attention was paid to one minority group’s safety, and not to that of another group. This, the embedded presence of many (in)famous criminals, and other stories lightly linked to Stonewall make it a unique and interesting book. 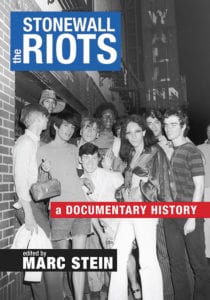 Because memories fade, opinions differ and people die, this book is a valuable resource to have. Editor Marc Stein has collected photographs, court transcripts, notes, newspaper excerpts and transcripts of documents that prove an intimate timeline for the years 1965 through 1973. His focus was on four major cities but he also includes documents that originated elsewhere; works of fiction also show up in this book. While it’s primarily about gay men, lesbians and “transvestites” are inside its pages, as well. There is always more to the story, as this book proves. 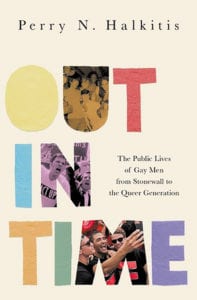 It’s normal to want to compare the way things were in 1969 to the way things are now. Out in Time does exactly that with three generations of gay men to show that, while there are differences in social attitudes, health, legalities, and politics, there are also striking similarities in challenges and in gains. Done with mini-interviews woven through narrative to hold together the words of everyday people, this is an easy book to step into, with short chapters and browse-able segments.

Readers should note that these books are historically-based and may be on the scholarly side, eye-opening and quite entertaining. If you have keen memories of the summer of ’69, what’s here may pull you back 50 years. If you’re too young to remember what happened then, these books on the Stonewall Riots will keep you busy this summer. █