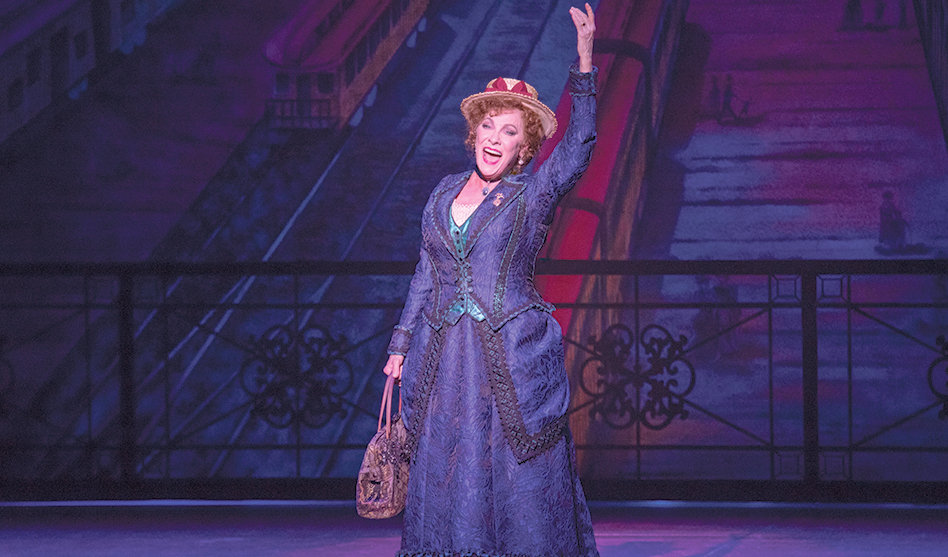 One of Broadway’s reigning queens never much wanted to play Dolly Levi. Now she sees it as a defining role in a storied theater career

Some theater actresses are forever associated with the roles they originated so memorably: Ethel Merman as Mama Rose. Angela Lansbury as Mrs. Lovett. Carol Channing as Dolly Levi.

And, for that matter, Betty Buckley as Grizabella the Glamour Cat. Who wants to follow them into a revival?

Certainly not Buckley herself, who after a career that includes not only her Tony-winning role in Cats but the original productions of 1776, The Mystery of Edwin Drood and others, and turns in the initial Broadway runs of Pippin, Song and Dance and Sunset Blvd., has little left to prove. But when she was asked to launch the national tour of the acclaimed revival of Jerry Herman’s Hello, Dolly! (which on Broadway won Bette Midler one of four Tonys bestowed on the production)… she paused. Then relented.

And boy is she glad she did.

After nearly a year on the road, the North Texas native is about to wrap up her first-ever national tour, but not before coming home to Fair Park Music Hall for a two-week run.

We chatted with Buckley (on the day before her birthday, no less) about “dueling divas,” the genius of Jerry Zaks and Scott Rudin and finally “getting” the story of Hello, Dolly.

Dallas Voice: Surprisingly — to me at least — this is your first-ever national tour; way to be a late bloomer! How has the experience been? Betty Buckley: It’s been great. Lewis Stadlen, my leading man, is a great actor and a wonderful person, and that’s everything on the road. The cast is very young, and all are incredible triple-threats — they all dance beautifully and sing wonderfully and are good actors. To be a part of this production directed by Gene and Santo and the new arrangement…

If you were to ask me to name one show to define what is meant by the term “Broadway musical comedy,” I would name Hello Dolly. Do you agree with that? Yes — it’s representational of the Golden Age of the Broadway musical form. But honestly, I was never a fan of the show from the time I saw it in my teens. That’s my excuse — I was really young. Then I saw it again on vacation [in New York] with Pearl Bailey, and I thought it was a great entertainment, but I didn’t get the story at all — it didn’t move me like Gypsy or West Side Story.

So Dolly Levi was never a dream role for you? No — it wasn’t something on my wish list at all.

How did that change? Three months before [the Bette Midler-led revival] won all those Tonys, I saw it. I was profoundly moved by it — I just started crying from the phenomenal accomplishment of the artistic collaborators — director Jerry Zaks and producer Scott Rudin [and the entire design team]. I understood the story for the first time! And there was Bette Midler’s incredible charm, and within that charm, she was so fragile but funny. I turned to my brother Norman while weeping openly and said, “This is the greatest musical theater performance I’ve ever seen.” I was on the second row leaning across the first row trying to touch [Midler]. I was like a mall girl yelling and screaming.

What about the story finally resonated with you? It’s a story of a woman at a later point in her life when she reclaims her place in society and wants to enjoy a vital, collaborative existence. I tend to be a couch potato. But Dolly is one of the most joyous and determined people I’ve ever met. To live this life of love for all people…  that’s a tall order. But she’s really inspired my own self. I’ve lost 40 pounds. I’ve reclaimed my Broadway voice. It was a great gift. I love when life surprises you like that. I often pray to be surprised.

So that’s what it took to get you to want the role… Even then it wasn’t my dream role! As an actress and singer, normally when I see a show, I’m always analyzing — how would I do that? I’m evaluating. I just do it, I can’t turn it off. But [watching] it, I had no analysis in my brain — I was watching just for the pure experience of it. I appreciated it in total for the collaboration of these artists, who put so much love in this production.

How did you end up headlining the national tour then? It was always about Jerry and Scott, who have loved this show since they were boys — they would watch the original production with Carol Channing from the back row. So a year ago January, I was in New Orleans on the set for Preacher, playing the principal villain, which is the kind of role I love. And my manager called and said [Jerry and Scott] would like to take the national tour out in the fall — it’s an offer. I paced around my hotel room but [eventually] said, “Well, of course.” Jerry and Scott and I had a lovely three-hour meeting and I said, “Really? You want me to do this? Me?” Together they have put so much love into this piece. It’s not an ordinary thing. For me to be the quarterback they drafted to carry this across the United States is a huge honor — a joy eight times a week. It’s really amazing.

Is there any baggage associated with taking over a role so closely identified with one performer the way Carol Channing is with Dolly? Oh, for sure. That’s probably one of the reasons [I hesitated to accept the role initially]. I’ve been through that before. When I took on the role of Norma Desmond in Sunset Blvd., there was a lot of scuttlebutt with me being a part of the supposed “dueling divas,” which was such bullshit, because there’s no such thing. None of us is like the other, nor should we try to be — the arts is not a competitive sport. We are apples and oranges — can we not enjoy our apples and our oranges? We are programmed on a daily basis to think “Bigger better best,” and it’s ludicrous. I don’t like being put in a hopper of “actresses who played Norma Desmond” … or Dolly Levi. There’s no relevancy to that at all. That gossip — it’s tedious, annoying and in many cases very hurtful. It takes time to process to get back to the state of being where you need to do your job.

[For the tour], it took a little bit longer than it does on Broadway, to get my footing, to know what I was doing. You have to get behind your own offering — “This is my painting of Dolly Levi” — and put your signature on it. It’s ever-evolving, and during a long run, eight times a week it is a growth experience. That’s one of the perks of the job — you can go deeper and deeper into an experience until you become one with the character, when you can get beyond the criticism of what people think it’s supposed to be.

About four months into the run, I found my footing, and all the important critics have gone on the line for my performance. People started getting what I was actually doing. As an actress, you want to communicate something to people, and when you discover your communication is connected to another, when you actually see people appreciating what you’re doing… that has been the blessing.