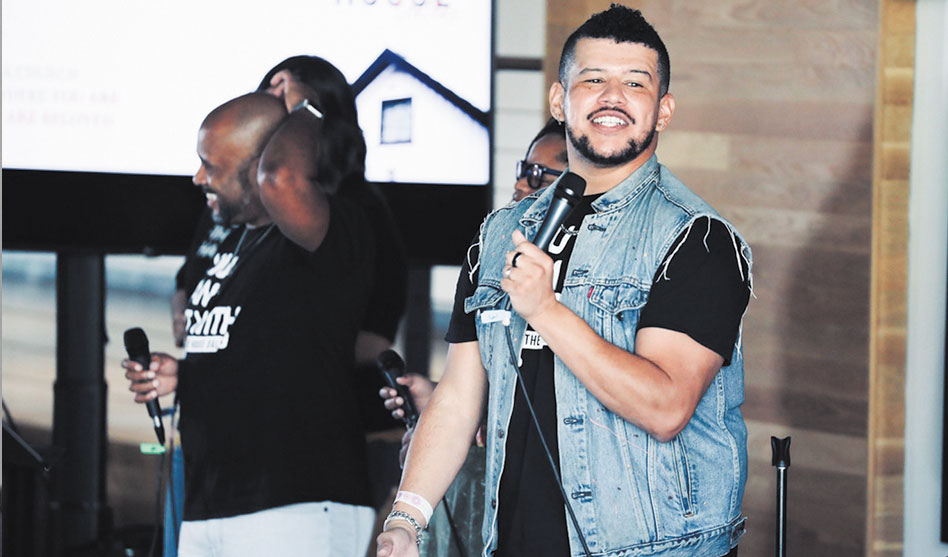 Chris Chism at his church

During the pandemic, Chris Chism founded a new church that’s been rapidly growing

“If you ever told me I would start a church in the middle of a pandemic, I would have laughed at you,” Chris Chism admits. But start a church he did, and as it approaches its first anniversary, The House | Dallas, as the church is known, has experienced significant growth.

The House began meeting in members’ living rooms, connected by Facebook Live. But, Chism said, members were having trouble keeping up with when services would be held and where.

So they found a coffee shop to meet in but quickly outgrew that space. Then a member offered a place in Las Colinas that’s a shared, flexible office at a very attractive rate. Both of those factors were important to Chism. He didn’t want to burden his mostly youthful congregation with high building costs, and he wanted some place comfortable to meet. Sofas rather than pews in an industrial setting offered the right vibe, he explained. 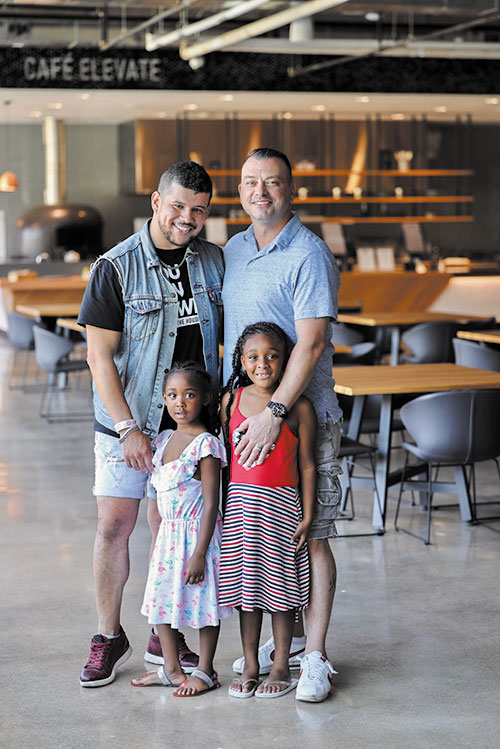 Chris Chism with his husband and children

But the online component remained. That connected the Dallas church with a group in Austin that’s been with Chism from the beginning, and it has allowed others to join from around the country. It also allows potential members to sample Chism’s style of worship from home.

One thing that sets The House apart from most other churches is the time of the service: 2 p.m. on Sunday afternoons. Chism found that during the pandemic, many people had changed their routines. Sunday mornings were for sleeping late and having brunch. The

mid-afternoon start time gives his members plenty of time to get going as well as giving the pastor time to work two other gigs.
A week after he left his contemporary service ministry at Cathedral of Hope last year, Grand Prairie United Methodist Church engaged Chism’s services for an early Sunday morning service. Later in the year, he picked up a second gig for a late morning service at another church. That keeps him running each Sunday.

Chism’s background is Pentecostal. But rather than borrowing songs from a church that’s not LGBTQ-welcoming, he’s writing his own praise and worship music that he hopes other welcoming congregations will share.

He described the church he grew up in as very controlling. When he went away to school in San Antonio, he joined an evangelical church in his new city. His new pastor was friendly with his former pastor who, after just a year away, told Chism it was time to come home.

Chism returned to Dallas, married a woman and pursued music and his love of the church. But a few years later, when he came out, he instantly lost everything.

Within months, however, he was back on his feet when the Rev. Jo Hudson hired him to do a contemporary service at Cathedral of Hope. “That was my introduction to the progressive side,” he said.

His divorce wasn’t even finalized yet.

Chism described how he made that leap from his religious conservative background to out gay man: “You just know when it’s time to do what you’re called to do,” he said.

When he opened The House, he was surprised who began showing up. Among his new flock was a worship leader at a large Hispanic evangelical church who was still married but in the process of coming out. Chism said the man could join a group to talk on a Sunday afternoon in someone’s living room but couldn’t attend a mainstream LGBTQ congregation — at least not yet.

Younger people fill the congregation, he said, along with some old friends who may or may not also attend church elsewhere.

Many people in the community know Chism as a performer rather than as a pastor. For several years, he performed most Thursday nights at Alexandre’s and was picking up that gig again when COVID-19 shut that bar down again. Chism was out of town when that news came down. He spent last week with his husband and their two daughters for a couple of days at Disneyworld and a few days on the beach in south Florida.

Chism said he and his husband became parents almost accidentally. The girls’ mother, who worked with Chism’s mom, needed to go to rehab. Chism and his husband agreed to foster the girls and have since adopted them.

Today, the girls see their mother regularly. That wasn’t always the case. CPS wanted to return the girls to their mom after just six months before she had done the hard work on her recovery. After a court battle with CPS, the dads kept the girls.

Now, Chism said, Mom’s doing well, and she sometimes picks them up from school, and, if the school has called about a problem, she’s in on the discussion so that all parents are on the same page.

Despite his years of evangelical upbringing, Chism said, “If it wasn’t for Cathedral of Hope in my life, I wouldn’t be where I am now.”

As for his new church, “We’re still figuring it out,” he said. “I’ve released myself from the pressure of being who we’re not.”

The House|Dallas can be found on Facebook Live and meets in person at VeriSpace, 901 W. Walnut Hill Lane, Irving at 2 p.m. on Sundays.