How to do the wrong thing right

Well, shove a straw into some sweet coconut milk, peel me a big banana and spank the pretty monkey on my back —April is here, and already going apeshit. Apparently, you boys’ testosterone levels must have simultaneously emerged from a winter’s hibernation at once, with your first blinking thought being, “I need me some condom-free porn—NOW!” 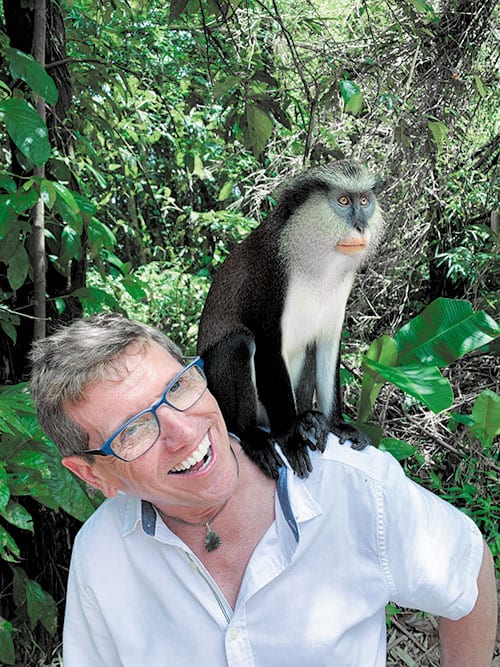 And why the hell not? After all, some of us, way back, crawled into a “Trump news-blackout den” and may, just now, finally be working up the nerve to see what new and exciting has happened since. Well guess what? Surprise, surprise, it’s just the same-old/tired-old expected monkey business, conducted by the same tired-old blustering, orange orangutan we all know and none love — a man who (sigh) learns nothing, sees nothing, hears nothing and does nothing but whump his portly, puffed-out chest. Successfully maneuvering through the tar-sludge of TrumpWorld exacts nothing shorter the nimble agilities of a flier monkey; The New Yorker’s Adam Gopnik recently “demystified” what makes the inner-clockworks of this particular psychopathic primate tick: “Back in 1980, Trump destroyed the façade of the old Bonwit Teller building, which he razed to make way for Trump Tower, after being told that he shouldn’t and when no one expected that he would. He has learned that, if you just do things, ordinary people with normal expectations about human behavior will have a hard time believing that you’re doing them.”

I’ve never heard it put better; so, let’s all us sinless amongst the monkey bars here get right to it.

Most, I know, would probably be stunned how someone like me — middle-aged, under-developed and just a few extra pounds overweight — could score any sex, say nothing of sex with porn stars, and iconic ones, too! Not to toot my own horn, but I’m talking the likes of even such super-legends as the mighty Mr. Horse Cock himself (everybody knows his name but respecting the deceased, I’ll halt there). In fact, Howard, here’s just one juicy nugget that’ll whet your men’s hoochies: I once asked one of those blessed Rockland brothers (I can’t remember now whether it was Vince, Hal or Shane) how many days they had to “save it up” to deliver such impressive money shots, and he just grinned, “That’s a secret between me, one cleverly hidden turkey baster and two cans of sweetened condensed coconut milk.” Talk about bursting balloons! Anyhow, I’ll be happy to divulge for your readers some currently still fuckable conquests of mine they could, wink-wink, enjoy for themselves a private-sampling of. So here, in alphabetized order, is my full legendary list [fully deleted here by Howard]. — Super Ron

Dear Super Con: I suppose it but loomed inevitable, this fun notion to collect vintage gay porn stars in the same way once far-more-innocent boys traded baseball cards. However, the near venal glee you take in, wink-wink, outing the privacy of these men’s current lives springs to my mind Gene Hackman’s belly-splitting turn in The Birdcage, playing fair-weather Sen. Kevin Keeley of Ohio (of course) — an anxiety-rattled, candy-gorging, ultra-right-wing moralist and vice president of The Coalition for Moral Order, whose co-founder has just expired in a seedy hotel room atop an underage black prostitute. Hackman’s disgust isn’t the hypocrisy; rather, his stomach-churning horror is that the hooker lived to tell the tale. As the old political truism goes, the only thing worse than being caught in bed with a dead girl, would be a live boy.

“Jackpot!” he yowled with fist-pumping triumph. “Boys, you’ll never guess who I just fucked!” Beaded sweat glistened even his earlobes. “Uh huh, that’s right — even if a little plumper, and grayer, for the wear since his beefcake-blond halcyon days. But I’m the man who just made Leo Ford’s toes curl!”

Our other roommate rolled his eyes. “In your G-fueled dreams did you just zombie-fuck Leo? He’s been dead for decades — longer, even than porn-partner Lance: A motorcycle accident in the early ’80s.”

“Did I say Leo Ford?” he redounded. “I meant Rex Chandler… or was it, Cole Carpenter? It’d be easier if the dude’s dick had gotten hard.”

Dear Delirium Tremens: Kick him out? Hell, he’s the ideal roommate: He’s never there… and even when he is, he’s never there. What I’m stuck on, upon reflection here, is the very existence of over 16,000 pre-condom 1980s gay porn titles! It seems oddly flinch-worthy…especially considering that as early as even 1983, word was already out regarding just exactly how AIDS is transmitted. (Perhaps the ’70s comprises the preponderance of those titles?)
Regardless, meeting the stars still alive today from these films, in any normal comparison, would be of the same breath-inhaling/tabloid-fodder equivalency to stumbling across one of those rare photos of past eras’ entertainment/politics stars mundanely doing, only in retrospection’s prism, what today would incite picketing on The Capitol’s steps: Jackie Kennedy serenely smoking atop the deck of the Honey Fitz, flaunting an elegant, summery baby bump; Elizabeth Taylor flashing crimson lipstick-smudged teeth, as she descends the curved marble staircase of a 747’s First Class Lounge swathed in thigh-length leopard skin, its matching turban ornamentally adazzle of a flawless blood diamond large as a damson; Greg Louganis’s 1984 diving preliminaries at the summer Olympics in Los Angeles, hysterically resultant of the pool being drained following a blood droplet’s photo-bombed red glare, way atop the diving board in midair.
Sometimes, sweet readers, fame-versus-infamy needs to remain observed in the same boxy era within which it originated: To go opening up musty discoveries to the light of present-day does nothing but accelerate decay.

P.S.: Oh, and presuming any of your curiosities have been piqued regarding what’s up with the pic of that monkey on my own grinning back: Well, coincidentally enough, I just returned from my honeymoon in Grenada: My betrothed and I took in a meandering, day-excursion hitting the local highlights—my personal favorite being the protected rain forest in Grand Etang National Park, a verdant amalgamation of Kong Island meets The Emerald City, dystopic of creeping mists and monstrous ferns, amidst crystal waterfalls gurgling down mountains fragrant of wild nutmeg, cinnamon, cacao, tamarinds, breadfruit and bananas — especially bananas, which the park rangers enthusiastically hawk, assuring every tourist a live monkey photo-op theirs for the taking. FYI, these “Mona monkeys” of Grenada originally arrived as stowaways on African slave ships back in the 1770s. There are no primates indigenous to The Caribbean, to which Howard here (call me Dr. Doolittle of The West Indies!) says, “Strand me on a desert island half run amok with Mona monkeys from the 1770s and gay porn icons from the 1970s — and I can I can guarantee you that it’ll be a monkey who’s getting my banana!”

Send your questions to AskHoward@dallasvoice.com.